Guest Post: The Background To My Book Series. By Tim Walker.

Hi Emma and thanks for inviting me to your book blog.

I’m an independent author based near Windsor, UK. Whilst undergoing skin cancer treatment in 2013, I found I had time on my hands to try something new, so I did an online creative writing course and started writing short stories. I joined a writing group in Windsor and this helped me with writing tips and developed my confidence. By 2015 I had a collection of short stories and sought the help of a copy editor to knock them into shape. I taught myself how to format e-books and paperbacks using the Amazon Kindle Direct Publishing (KDP) platform, designed my own cover and published Thames Valley Tales.

In 2015 I visited the site of a former Roman town not far from where I lived – Silchester – and felt the call of history! I pondered the question, ‘what would it have been like for the local inhabitants living under Roman rule, and then to suddenly be free to revert to their tribal customs and authority once the Romans left, around the year 410 C.E.? This led me to research the period and to start writing a fictional story about an auxiliary cavalry commander who was out on patrol when a hurried evacuation took place of his unit. Having seen a roving Saxon warband nearby, he decides to ignore his orders and agrees to the plea from the local tribal chief to help him form a defence of the town. The Saxons follow the long, straight road to their gate and a tense siege ensues.

Abandoned was published as a long short story/short novella (about 20,000 words) in December 2015, and soon attracted both praise for the action-packed tale, and criticism/frustration for its brevity. In the meantime, my research had led me onto Geoffrey of Monmouth’s timeline of post-Roman kings of Britain in a translation of his 1136 work, The History of the Kings of Britain. Although widely dismissed by historians as more fiction than history, I decided to base my second story on Geoffrey’s nebulous character of Ambrosius Aurelianus, described by monk Gildas (On the Ruin of Britain c. 540 C.E.) as of noble birth and ‘the last of the Romans’ (meaning the Romano-British nobility). So, with the publication of Ambrosius: Last of the Romans in 2017, I then re-visited Abandoned and re-wrote it, keeping the short story bit as the middle part. Abandoned was re-launched as a much longer second edition in 2018, and I began working on book three in my emerging series, Uther’s Destiny (2018). By now the series had a name – A Light in the Dark Ages, and I found a graphic designer, Cathy Walker, to re-design my Abandoned book cover in the same style as Ambrosius and Uther’s Destiny. 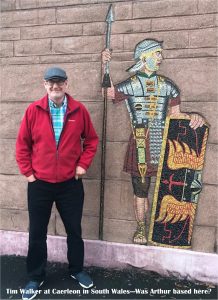 I then had a dilemma – should I roll up my sleeves and write my own story of Uther’s son, Arthur, and enter the world of the Arthurian legend? I was somewhat intimidated by the prospect, owing to the number of other authors who had already entered this popular territory. There seemed to me to be two strands – those who embraced the romantic Middle Ages King Arthur, he of the shining armour, Camelot, the Holy Grail and the knights of the round table; or the gritty 5th – 6th century warlord, located in the post-Roman world where the Anglo-Saxons were busy colonising coastal areas and steadily moving inland.

My choice had already made for me by my approach in the earlier books – it would be the latter – a believable quasi-historical Arthur, organising and leading Briton resistance to the spread of the Anglo-Saxons. And so, I continued from where Uther’s Destiny finished, with a teenager Arthur having gone along with Merlyn’s trick and pulled the sword of Ambrosius (Excalibur) from the stone. Arthur Dux Bellorum, published in 2019, is the story of Arthur’s escape from the clutches of his half-sister, Morgana, to undertake a dangerous journey northward with his band of followers, learning his trade as both warrior and leader.

Arthur and his followers finally settle at the former Roman fort of Vindolanda, on Hadrian’s Wall, where they find an unexpected ally. The battles and skirmishes Arthur fights in this novel are loosely based on the surmised locations of Nennius’s twelve battles of Arthur (in his 820 C.E. work, The History of the Britons) by historian Nash-Ford. Nennius describes Arthur as ‘Dux Bellorum’ (leader of battles), giving the novel its title. This theme continues with part two of Arthur’s story, in 2020’s Arthur Rex Brittonum (‘King of the Britons’). Arthur here is a middle-aged, married man, who travels south to answer his sister, Ann’s, call for help. She is Queen to Owain’s King of the Kingdom of Powys (mid-Wales and the West Midlands of England). Arthur joins them at the former Roman town of Viriconium, where he addresses a council of kings and chiefs and pleads with them to join his cause in repelling Angle and Saxon invaders.

And so, this is how I came to research and write my own version of a ‘real’ Arthur’s story, drawing an historical fixing point from a recent interpretation of the Welsh Annal’s dating of Arthur’s last battle at Camlann to 539 C.E. This is contentious and historians still argue that there is insufficient evidence to move Arthur from the realm of legend into verifiable history. What fascinated me was that if it was at all possible that a King Arthur fought and died at the Battle of Camlann on or near the year 539 C.E., then assuming he was 50 years old, then he would have been born around the year 489, just 79 years after the date given for Rome’s final separation from Britannia. Arthur could well have been descended from a Romano-Briton elite family who held a powerful regional tribal title. This goes some way to explaining my tag line, ‘A light in the Dark Ages, where history meets legend’. 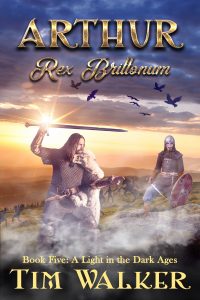 Arthur Rex Brittonum (2020) has been short-listed for the Historical Book of the Year (early Medieval period) Award in the Coffee Pot Book Club Awards 2020. Although in a series, it can be read as a standalone, as it covers the latter half of Arthur’s life.

Find out more about Tim Walker and his books at his website – http://www.timwalkerwrites.co.uk